This article explains how the origins of the Easter tradition, which remains to this day a lunar festival
Why does the Easter date change every year?

In 325AD the Council of Nicaea determined that Easter should fall on the Sunday following the first full moon after the spring equinox. This tradition is still with us and explains why Easter is to this day a “moveable feast”, as it is of course guided by the path of the moon.

However, there’s a defined period in which Easter Sunday can fall. This always is between March 25 and April 25. The origins of Easter derive from the Jewish festival of Passover. You can still see it in the various names like Paques (French), Pasqua (Italian) or Paaske (Danish).
But in English-speaking countries, the name Easter is taken from Eostre, the goddess of spring and nature. It honors the re-birth of another growing cycle. In Germany, this goddess was known as Ostara and Easter there is called Ostern.

Where does the Easter celebration originate from?

Many of the pagan customs associated with the celebration of spring found their way into Christian festivals. Christmas (celebrated shortly after the winter solstice = the shortest day of the year) celebrates the rebirth of the sun. Baby Jesus with the halo is a direct reminder of this.

Easter is about death and rebirth. Traditionally the spring equinox on the 21st March (when day equals night) symbolized the ‘death’ of the old year and the ‘rebirth’ of nature and a new growing cycle. Trees start to blossom, the farmers start sowing and the Roman military traditionally started their ‘marching season’. The reason why the year started with March (named after Mars, the God of war).

The zodiac also starts with Aries (the ram) on the 21st March – and of course, there was the ‘sacrificial lamb’ slaughtered at Passover – to celebrate the safe journey into the new season. In a round-about way, all these symbols align and point to one event – the rebirth of the new year (growing cycle). 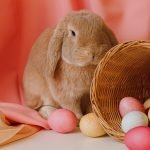 What has the Easter rabbit got to do with it all and why do we colour Easter eggs?

In spring nature ‘resurrects’ and a new fertility cycle starts. What would be more fitting than using fertility symbols to celebrate this ‘burst of new life’.

Since the beginning of time, the moon cycle connects to the human fertility cycle. No wonder that ‘menstruation’ comes from mene – the Ancient Greek word for moon. Eggs are one of the most prominent fertility symbols. The human embryo grows in ‘an egg’ and so do all other mammals. Birds and reptiles also hatch from an egg. During the Middle Ages, people began decorating eggs and eating them as a treat following mass on Easter Sunday. They would have tasted wonderful after a month of fasting, better known as Lent. This tradition is still widely practiced in Central Europe. Countries like Poland, Austria, Germany still decorate hard-boiled eggs at Easter.

The rabbit is also connected with the moon and Easter. Some believe we can see ‘a hare’ looking at the moon. I am not so convinced by this theory. But ‘breeding like rabbits’ has definitely something to do with fertility.

‘The Easter bunny bringing eggs’  is a metaphor literally bursting with fertility symbols and new life. Over time though, this tradition started to dwindle. But that changed in 1722 when the German medic and writer Georg Franck von Franckenau published a story that reassociated the rabbit with Easter. In his book, the hare started to hide coloured eggs and sweets – which children had to find on Easter Sunday. This practice took off in 18th century Germany. Today children still go on an Easter hunt for chocolate eggs in their garden, keeping the old pagan fertility tradition alive.