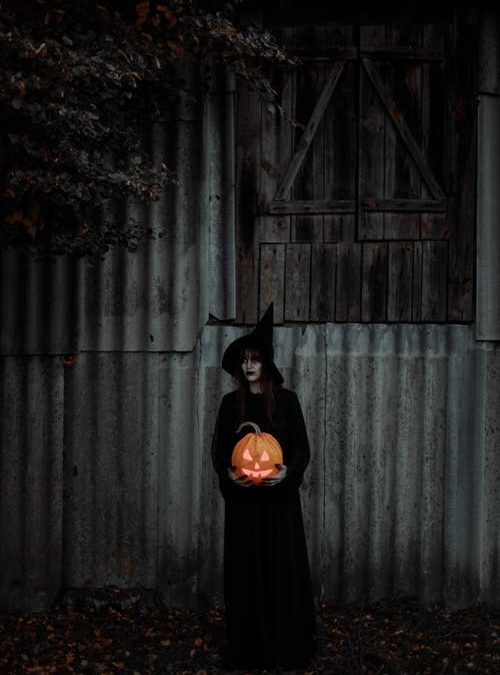 This post will delve deeper into the subject of Halloween, where it comes from, and its significance.

The history of Halloween

Halloween has its origin in the Celtic festival Samhain, celebrated on the evening of the 31st of October. This symbolized the end of the harvest season and the ‘death of the seasonal growing cycle’. It was also celebrated on the eve before All Saints Day or better known as ‘ All Hallow’s Day’- the day of the Saints and the dead Ancestors. The Celts believed in reincarnation. The highest honour was to die in battle. The body of a slain soldier or member of society was burnt on a pyre together with the corpse of their favorite horse. The cold ashes were collected in a clay jar and buried in a mound. For centuries these practices continued. The souls turned into invisible figures wearing cloaks with large hoods – just think of the grim reaper! These figures escaped in the moonlight to another world, unseen by those left behind and eventually reincarnated into another human, animal or plant. Many cultures, amongst them the Sumerians, Babylonians and Minoans worshipped moon gods and their sacred animals were the cows and bulls. Here is an article that explains a bit more about the Minoan culture and their practices with bull jumping, now believed to be a forerunner of the Olympic Games.

Bull horns represented the moon cycle and the cycle of life. The first cave paintings dating back to 30,000 B.C. depicted horned animals together with the cycle of the moon. Horns decorated helmets and found their ways into the graves of the dead. The moon, fertility, celebrations and horns – all are symbols of the moon gods, celebrating the rhythm of eternal life.  Just like the seasons, we come, we go and we are reborn.
As Albert Einstein once said, ” Energy doesn’t get lost, it only gets transformed’.  As the leaves sprout in spring and help the tree survive throughout summer and autumn. Eventually, they wilt and fall to the ground.  But that is not the end. The dead leaves now have a new purpose.  Rotted down, they produce precious compost which nourishes the trees and makes sure that the next growing cycle begins.

A practice of Biodynamic agriculture sees the farmer fill a cow horn with manure in autumn. This gets buried into the ground for around 6 months. In late spring it gets dug up and the now well-rotted manure is diluted into a spray preparation that fertilizes the new crops on the fields. As weird as it sounds these preparations produce excellent results. It is most likely down to the microbes that find their way into the soil and nourish it.

How come we dress up as witches at Halloween?

During the Middle Ages and even before,  local herb women, so-called witches, ran the Ancient healthcare system. They delivered babies and attended to the sick and dying. They made concoctions and potions to give to their patients. They made these out of animal products and gathered herbs. Some medicines ask for blossoms, others for dried leaves or root extracts. Collecting roots usually happened during the evening or at night. The reason was that roots deemed to be less effective once exposed to direct sunlight. The logical time to gather these roots was around the Full Moon, as it provided the necessary light at night.  Digging out roots at Full Moon and being connected to the dead (as some patients undoubtedly died) – the myth of the witch was born.  It all fitted in nicely with Halloween, the festival of the dead.
The connection between witches and Friday the 13th comes from the pagan lunar year. The Ancient Calendar year followed the path of the moon. Normally 12 moon cycles with the occasional  13th cycle added in to align the year again with the seasons. Friday was the day of worship for the Fertility Goddess Frigga. Friday the 13th became synonymous with the forbidden pagan knowledge and a particularly unlucky day.