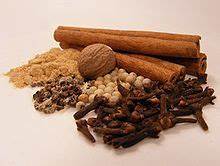 In Europe cinnamon is the spice of Christmas and mostly used in Christmas decorations and for baking. The evergreen cinnamon tree grows predominantly in Indonesia and China and its fragrant bark is rolled up and left to dry. Then it is cut up into pieces known as cinnamon sticks. Alternatively, it is available as a ground down mid-brown cinnamon powder.

Nowadays it is a must for every kitchen cupboard, but when it first entered the history books around 2500 B.C. it was so expensive that it was only used as an offering to kings and gods.  The Egyptian used it as part of the concoction in the mummification process and Pliny the Elder wrote that a Roman pound of cinnamon (roughly 320 pounds or 11.5 oz.) was worth the wages of fifty months’ of labour and therefore unimaginable for daily use.

From 1600 onwards the Dutch started to import cinnamon to Europe and later the British took over Ceylon from the Dutch and with it the cinnamon plantation. Then the East India company imported cinnamon together with tea and made it more accessible for the European taste.

Health benefits: It has anti-inflammatory properties and has been linked to a reduced risk of heart disease. Adding a small amount of cinnamon into your daily diet can help people with type 2 diabetes.

Cinnamon also helps to fight fungal and bacterial infections, helps with insulin resistance. So, all in all, it has many vital health benefits.

Cinnamon in the kitchen: 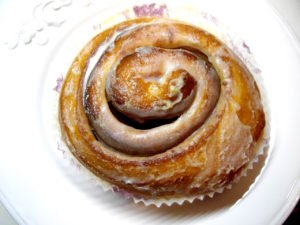 This a recipe from Sweden and makes wonderful pre-Christmas treats.

How to cook it:
Plum and cinnamon compote:
500g of sweets plums, washed, cut in halves and stones taken out, juice of half a lemon, 1/2 teaspoon of cinnamon.
Place the plums into a saucepan and cook until they have dissolved into a compote/jam-like consistency. Then fill into sterilized glass jars and add to your breakfast cereals or use neat with bread or croissants. This is a sugar-free recipe. If you want it a bit sweeter add a touch of Algave honey to it.

Cinnamon recipe for health and beauty:

This is a great recipe for the cold winter month. I found it in an old book the other day  and thought I use it on myself and absolutely loved it. It tastes nice, the sugar gently scrubs off any flakey bits and the olive oil and honey nourish the lips. If your lips are very chapped you can keep it on for a little while until it has soaked in.

Here is the recipe which takes a few minutes to make:

Mix all ingredients into a paste and let it all settle a bit. Then rub it gently onto your lips. If your lips are very dry and cracked,  please make sure you don’t rub too much, instead let it this mixture soak in and then gently take off with a damp cotton.  If your lips are not cracked, then you can rub this mixture over them to achieve a peeling effect. Blot dry with a tissue.  The rest of the mixture you can fill into an empty pot or jar and repeat the appliation when required.