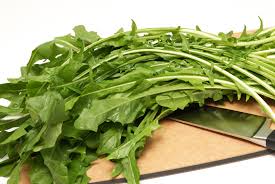 Dandelions often grow in lawns and that is a reason why most gardeners see dandelions as a garden pest that spoils their perfect lawn. Only a few people know that the dandelion plant is actually a very useful and healthy kitchen herb.

Its name comes from the French ‘dent de lion’ which means ‘lion’s tooth’.  It refers to the shape of the leaves which vaguely resemble lion’s teeth. In the English folklore dandelion  is often referred to as ‘piss a bed’, because it has such a strong diuretic effect. That is the reason why dandelion leaves and teas should be used as part of a successful  weight loss regime. The dandelion tea is blood cleansing, clears the kidney and bladder and ‘make you go to the loo’. The same effect, if a bit milder, is achieved when eating the fresh dandelions leaves, for example as part of a spring/early summer salad.

The golden flowers need to be harvested before they turn to white blooms that disperse in the wind. Then they can be used to make dandelion honey (please see recipe below) and picked when still yellow, it won’t self-seed as much, keep the dandelion population in check.

The dandelion root is  mainly used in form of tinctures for ailments such as gout, rheumatism, as a blood cleanser and for people who suffer from diabetes.

My favourite dressing is: 1 tbsp olive oil, 1 tbsp of apple cider vinegar, 1 tsp of dijon mustard and some pressed garlic, add a few drops  of water, mix all together in a jar and add to the salad.

It is quick and easy to do. Dandelion honey is a good alternative to plain white sugar when it comes to sweeten your tea, breakfast porridge or you can even bake with it. Why not ask your children to make it with you, as they can help you gather the bright yellow flowers.For a couple of jars of dandelion honey you will need: